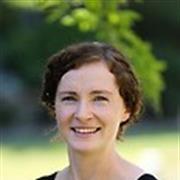 Dr. Áine Mahon is Assistant Professor in the School of Education at UCD, a position she has held since September 2015. She researches and teaches in the Philosophy of Education and the Philosophy of Literature. Áine was awarded a B.A. with First Class Honours from Trinity College Dublin (2005), an M.A. with Distinction from Queen's University Belfast (2006) and a Ph.D. from the University of Nottingham (2009). She is also the very proud holder of a Dioplóma sa Ghaeilge Fheidhmeach from University College Dublin (2019). For the 2010/11 academic year, Áine was the recipient of the prestigious Simon Research Fellowship from the University of Edinburgh's Institute for Advanced Studies in the Humanities. From 2011-2013, Áine held an Irish Research Council Postdoctoral Fellowship in the School of Philosophy at UCD. Also in 2013, she was a Fulbright Visiting Scholar in the Department of Philosophy at The New School for Social Research (New York). Áine is a founding member of Philosophy Ireland, a consortium of academics and teachers currently collaborating on the introduction of philosophy as a short course on the newly reformed Junior Cycle. With Dr. Danielle Petherbridge of UCD Philosophy, she is also co-founder of the Irish Young Philosopher Awards (youngphilosopherawards.ucd.ie) which were launched by President Michael D. Higgins in 2017. In 2018, together with her colleagues, Dr. Shane Bergin, Dr. Declan Fahie and Dr. Billy Kinsella, Áine received a Teaching Excellence Award from UCD College of Social Sciences and Law. Áine is married to Ronan and they have one daughter, Líadan Áine Mahon, born February 2019.