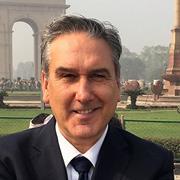 Alun Jones is Chair of Geography in the College of Social Sciences and Law. From 2007-2010 he was Head of School of Geography, Planning and Environmental Policy. Between 2011-2014 he was Vice-Principal for Research in the then UCD College of Human Sciences. In 2015 he was appointed Vice-Principal for Research, Innovation and Impact in the new UCD College of Social Sciences and Law. He chairs the College's Research Committee and is a member of both the University's Research Committee and Research Impact Committee. In 2016 he was appointed to the University's Faculty Promotion Committee. He has also chaired the University's Seed Funding Committee and the formative committee on UCD Research Impact.Prior to joining UCD in 2007 he was Professor of Human Geography, Head of Department, and Chair of the Social Sciences Research Committee at the University of Leicester (2004-2007), and before that Lecturer, then Associate Professor (Reader) of Human Geography at University College London. He has also held visiting posts at the Universities of Cambridge, Oxford, Lund, Bonn and Warsaw. In 1999-2000 he was made a visiting Fellow at St Catherine's College University of Oxford, in 2002-2004 was awarded a senior Leverhulme Research Fellowship, in 2005 presented with the Edward Heath Award by the Royal Geographical Society and Institute of British Geographers for his contribution to research on EU governance, and in 2006 made an Academician of the Learned Societies for the Social Sciences (FAc.SS) in the United Kingdom in recognition of his scholarship on the European Union. In April 2011 he was elected to the Royal Irish Academy (MRIA) and in October 2011 to the Academia Europaea (European Academy). He is currently a member of the Social Sciences Executive of the Academia Europea , Chair of the Geosciences and Geographical Sciences committee of the RIA, IGU National contact point for Ireland, and member of the European Science Foundation College of Reviewers.Alun Jones' research interests lie in political geography and critical geopolitics particularly in the context of the European Union, its governance, and external representation and links with neighbouring states and regions. With the support of a French Government Scholarship, his doctoral work examined institutionalism and agricultural reform in the Languedoc-Roussillon of France. His work on European governance has received numerous sources of support including the award of a Robert Schuman scholarship at the European Parliament secretariat (research division) in Luxembourg.Alun Jones' current research and publications activities focus on four principal areas:· Geographies of Diplomacy · Theoretical/conceptualisation of EU decision making melding political science and political geography perspectives.· Political Geography of Europeanization.· Discursive geopolitics of EU projection and the politics of neighbourhood especially in the Mediterranean and Arctic. Professor Jones is currently on the Editorial Board of the Transactions of the Institute of British Geographers (Impact Factor 2015= 3.17) and is the author of numerous books and international peer-reviewed papers on the political geography of European Union governance, Europeanization and the Mediterranean, and diplomacy. He has organised and chaired many sessions at the Association of American Geographers' meetings- most recently in San Francisco, Chicago, New York, New Orleans and Washington DC (2019) . His work has appeared in high-impact geography and political science journals including inter alia Annals of the Association of American Geographers (2006, 2009, 2013, 2019), Transactions of the Institute of British Geographers (2000, 2003, 2008, 2017, 2018), Geopolitics (2008, 2011) Political Geography (2009, 2011), European Urban and Regional Studies (2011, 2013, 2014), Journal of Common Market Studies (2011) and Geoforum (2013, 2015). He has held prestigious scholarships and fellowships from the Leverhulme Trust, Deutsche Akademische Austausdienst (DAAD), British Council and the Institut Francais, as well as research grants totalling in excess of Euros 1.5 million from the European Commission. He is currently part of a Marie Curie International Network on the Mediterranean with research teams in Morocco, Algeria, Italy, Israel and Portugal. Professor Jones is on the advisory board of UCD's Dublin European Institute (DEI ). At UCD Professor Jones lectures on the Political Geographies of European Integration, Critical Geopolitics, and research methods through international fieldclasses (Brussels, Reykjavik) at graduate and undergraduate levels. Alun is also a regular reviewer for the Discipline's international flagship journals, and a member of the European Science Foundation college of reviewers. He has served as external examiner and REF advisor at a number of UK universities (including UEA and Kings College London), and, in 2018, at the University of Amsterdam.