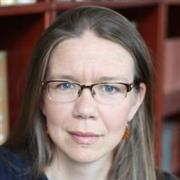 Dr Amrei Müller is a Lecturer/Assistant Professor (Ad Astra Fellow) at UCD Sutherland School of Law since January 2020. Amrei has obtained a PhD in Law from the University of Nottingham, and an LLM Degree in Human Rights Law (with distinction) from the same university. She also holds a BA degree in International Relations from Technische Universität Dresden, Germany. Her doctoral studies were funded by the UK Arts and Humanities Research Council and the School of Law, University of Nottingham. Amrei's research is situated in the area of human rights law and international humanitarian law (IHL). She is particularly interested in international, European and comparative human rights law, (democratic) institutional dimensions of human rights law, the human rights to health and science, IHL and its interplay with human rights law, and the international duties and responsibilities of non-state armed groups. Amrei is the author of 'The Relationship between Economic, Social and Cultural Rights and International Humanitarian Law' published in the series Nottingham Studies on Human Rights (Brill, 2013), a pioneering in-depth study of the parallel application of socio-economic rights and IHL in times of armed conflict. She has edited and co-edited two anthologies, in particular: 'Judicial Dialogue and Human Rights' (Cambridge University Press, 2017) and 'Human Rights Diplomacy' (Brill, 2011; with Michael O’Flaherty, Zdzislaw Kedzia and George Ulrich). Her research has also been published in prestigious international journals, among them the Human Rights Law Review, the International Review of the Red Cross and the International Journal of Human Rights; and in edited collections with leading international law publishers such as Oxford University Press, Cambridge University Press and Routledge. Amrei is currently conducting research on the duties and responsibilities of armed non-state actors under IHL and human rights law, taking account also of the right to self-determination. Before joining UCD, she conducted post-doctoral research at a number of European universities. At Queen’s University Belfast, School of Law she worked on her research project ‘Healthcare in Conflict: Do Armed Groups have Obligations and Responsibilities?’, funded by a three-year Leverhulme Trust Early Career Fellowship (2017-2019). At PluriCourts – Centre for the Study of the Legitimate Roles of the Judiciary in the Global Order, University of Oslo, funded by the Research Council of Norway she carried out her research project ‘Judicial Dialogue and Human Rights’ (2013-2016). At the University of Zürich, School of Law (2011-2012) she was involved in research in the area of the law of the European Convention on Human Rights and its impact on domestic legal orders. Amrei has also been a research assistant at the University of Nottingham Human Right Law Centre during her doctoral studies; and worked as a researcher with the German Institute for Human Rights and with UNDP Regional Centre for Europe and the Commonwealth of Independent States. At UCD, Amrei teaches The Law of Armed Conflict and coordinates the Research Module. Previously, she has taught Public International Law, Human Rights Law (international and European), Counter-terrorism and Human Rights and Comparative Human Rights at the universities of Belfast, Oslo, Zürich and Nottingham.