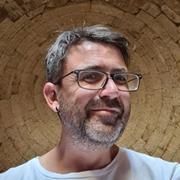 One of the things I find exciting about archaeology is the diverse ways that you can participate in it. Since completing my undergraduate, I was involved in working in professional field archaeology in Ireland, continuing when possible throughout my PhD. I took part in many field projects with more specific research orientation, and on one such I had the fortune of working at the site of Keros in the Cycladic Islands of Greece. This led to my first professional appointment as a Research Associate with the director of the site, Colin Renfrew, at the McDonald Institute for Archaeological Research at Cambridge, immediately after completing my PhD in 2006. In 2007 I began a collaboration with Barbara Hayden excavating the site of Priniatikos Pyrgos in East Crete, which was to continue until 2010. After the 2007 field seasons at both projects, I was appointed to an Irish Research Council postdoctoral fellowship at the UCD School of Archaeology until 2009, looking at Irish Bronze Age weaponry and warfare. I had the good fortune to continue contributing lectures and being involved in research there until 2011, while also undertaking a research fellowship at the National and Kapodistrian University of Athens. In 2011 I was presented with the enviable choice of taking a two-year Marie Curie Fellowship at the University of Sheffield or a three-year CARA fellowship between Sheffield and UCD Dublin, though chose the former opportunity. Hot on the completion of this, I was invited to be a visiting lecturer at the Masaryk University of Brno, completing a very busy 2013. Since then, I had a quiet 2014, followed by a very busy 2015 lecturing in UCD and initiating a new excavation at the Neolithic to Bronze Age site of Gradiste Idjos in Serbia. Following this, I took up a second Marie Sklodowska Curie fellowship at UCD School of Archaeology looking at regional diversity in Bronze Age smithing crafts in Europe. In 2017 I was awarded a European Research Council Consolidator Grant valued at 2 million Euro to conduct a new research project entitled "The Fall of 1200BC: The role of migration and conflict in social crises at end of the Bronze Age in South-eastern Europe." Following this award I took up a position as Associate Professor at the School of Archaeology, specialising in European Prehistory.