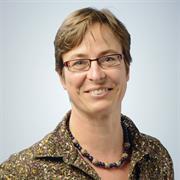 Bettina Migge is Professor of Linguistics in the UCD School of Languages, Cultures and Linguistics and since September 2016 she has been Head of the School of Languages, Cultures and Linguistics. She previously served as Interim Director of the UCD Applied Language Centre (2012-1013) and was Head of Linguistics (2008-11; 2016-2017). She studied at the Universität Hamburg (1986-8), University of Cameroon (Yaounde, 1988/9), Freie Universität Berlin (1989-91) and The Ohio State University (Columbus, 1991-8). She holds an MA (1994) and a PhD (1998) in Linguistics form the Ohio State University. For her PhD research, she carried out more than one year (1995/6) of field research in a small village in Suriname's prime rain forest and a total of six months in Benin. Her first academic job was at the Johann Wolfgang Goethe Universität, Frankfurt am Main (1998-2004). Since 2004, she has been permanently employed at the University College Dublin. While her initial research concentrated on diachronic language contact with a focus on issues of language creation and creole genesis and language description, she has since broadened her interests to issues and methods in synchronic language contact focusing on multilingual contexts, the role of sociolinguistic methods and approaches to language documentation, language and migration and language and education with respect to lesser-used languages and sociolinguistic research on Irish English. Her empirical focus is on the Creoles of Suriname and French Guiana (Pamaka, Ndyuka ((Busi)nenge(e) Tongo; Eastern Maroon Creoles) and Matawai), the Gbe languages of Bénin and (Irish) English. Her work explores both structural and socio-pragmatic issues in language. Since 2000 she has been involved in several research projects based at the French research unit SeDyL (CNRS, IRD, INALCO) funded by DGLFLF, ANR AIRD together with Isabelle Léglise (CNRS) and other reseachers, and participated in local language training initiatives. Since 2013 she has been supporting a participatory project (DicoGuy) in French Guiana which aims to create dictionaries for several local languages including (Busi)Nenge(e) Tongo. The first version of the trilingual dictionary Nenge(e)-French-English can now here accessed here: https://www.vjf.cnrs.fr/sedyl/publications.php?langue=en She has also engaged in funded research projects on migration to Ireland with researchers at UCD (Immigrant Council Ireland) and with Mary Gilmartin at NUI Maynooth (IRCHSS). With Donald Winford she has carried out research on the genesis of the Creoles of Suriname (NSF). She has published extensively in peer-reviewed journals, peer reviewed book collections with major publishers, edited several book collections and published monographs. She regularly presents her work at international and national conferences and workshops and peer reviews widely for international journals, book collections, publishers and grant agencies. She is a member of UCD's Human Subject ethics committee and currently serves on the language and literature committee of the Royal Irish Academy and the executive committee of the Society of Pidgin and Creole Linguistics. She was formerly a member of the executive committee of the Society for Caribbean Linguistics.