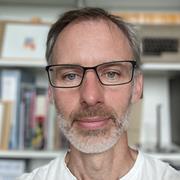 Conor Sweeney was born in Dublin, and went to school in St Conleth's, where the great teachings of Mr. Manning introduced him to the joys of Maths and Physics. This, coupled with a love of dismantling things, led him to do Mechanical Engineering in UCD. Despite a lack of engines to take apart, he thoroughly enjoyed himself, and left with a 2.1 degree.He then worked as a Design Engineer in Bergamo in northern Italy (fabulous food and wine) and Charlotte in North Carolina (lots of banks), before returning to pursue his love of research. This he did in Trinity College Dublin, where he was supervised by Dr Craig Meskell and had a great time with all the people in the Fluids group. This resulted in the production of a new vorticity-stream function CFD solver, a fast particle-in-mesh technique, and a Ph.D.After a further year doing a post-doc in TCD, he briefly thought about becoming a Patent Attorney (they do make a lot of money) but then an offer of working on climate change saw him join the C4I team in Met Eireann as a post-doc researcher in climate modelling. This took around four years, resulted in a nice Government report, and left him free to hop on his motorbike and travel overland from Dublin to Cape Town.He returned from his adventures back to Dublin, and back to UCD, where he did further post-doc research on forecasting for wind energy, and is now a lecturer in Applied and Computational Mathematics in the School of Mathematical Sciences, UCD.He is a member of the Meteorology and Climate Centre, the UCD Earth Institute and the UCD Energy Institute, and his current research interests include:improved forecasting methods for renewable energy and Energy Systems Integrationextreme events in climate datastorm tracking and analysis