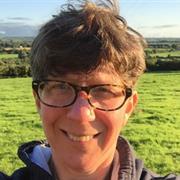 Danielle Clarke was educated in London and Oxford before coming to UCD in 1994. Most of her publications deal with writing by early modern women, their engagement with mainstream literary culture in particular. Other areas in which she has published include sexuality, literary theory, translation in the Renaissance, and textual criticism. Professor Clarke is currently working on a number of projects - a monograph on Gender and Cultural Reproduction 1500-1700; work on Irish recipe books from the 17th and early 18th centuries. She is also the editor of the Oxford Handbook of Early Modern Women's Writing.