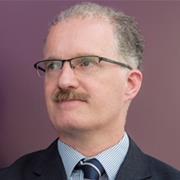 Prof. FitzPatrick received his BAI degree from the University of Dublin, Trinity College, in 1985. He subsequently received his D.Phil degree from the University of Oxford in 1990 for doctoral work entitled 'Mechanics of the Knee Joint'. After receiving his doctorate, he worked within the orthopaedic industry, initially as a Development Bioengineer with Howmedica International Ltd. in Limerick, Ireland, followed by a career path within DePuy International Ltd. in Leeds, UK, including managing product development and basic research programmes for knee, upper limb, trauma and spinal product lines. As Senior Development Manager, he was directly responsible for the development of a worldwide knee product development strategy and for the close liaison with clinicians involved in the design and development of knee, spine and upper limb devices. In 1998, he returned to Ireland to take up a position as College Lecturer within the Department of Mechancial Engineering at University College Dublin. He was promoted to Senior Lecturer in 2005, to Associate Professor in 2010 and Full Professor in 2012. He was Head of the School of Electrical, Electronic and Mechanical Engineering from September 2005 to August 2011, followed by a period as Vice Principal for Internationalisation & Development in the College of Engineering and Architecture. In September 2012, he was appointed as Provost of the Beijing-Dublin International College, a joint venture between UCD and Beijing University of Technology. In September 2014, he took on the additional roles of Dean of Engineering and Principal, UCD College of Engineering & Architecture. His primary research interests are in the fields of musculoskeletal modeling and anthropometrics, medical device design and design process methodologies. He has received funding for his research from the HEA, HRB, Enterprise Ireland and industrial sponsors.