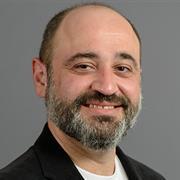 I am from Madrid, Spain. I studied Biology in the University of Alcalá de Henares. In 1998, after the conclusion of my degree, I moved to Santander where I started my thesis under the supervision of Piero Crespo. A year later Piero's lab moved to the Instituto de Investigaciones Biomédicas in Madrid where I concluded my PhD in the University Autónoma. In 2005 I started working as a postdoctoral researcher in Walter Kolch's lab at the Beatson Institute for Cancer Research in Glasgow (Scotland). In August 2009 I started working in Systems Biology Ireland. I am currently an Assistant Professor (Ad Astra fellow) in the School of Medicine and group leader in SBI. Since the beginning of my career I have worked in the study of signal transduction pathways involved in cancer development. During my PhD I used classical molecular and cellular biology to study the difference among the members of the Ras family of proteins. During the course of these studies I realized the use of classical reductionist approaches could slow down the progression of the signal transduction field due to the high complexity of signaling network. For this reason, I have applied new approaches that can help accelerate the study of signal transduction processes by (i) developing new proteomics based methods for the identification and delineation of new signaling networks; (ii) applying of systems biology for the development of signal transduction networks kinetics models. The result of these studies was the delineation of the tumor suppressor Hippo pathway in mammalian systems. Since the delineation of these pathways we have made key contributions to characterize the molecular mechanism that regulate this pathway and explain the role of this pathway in normal a pathological cell signaling. Research Centre: Systems Biology Ireland