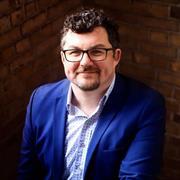 Dr Desmond Earley is a specialist in performance studies and has been director of the Choral Scholars of University College Dublin since 1998. Formerly Artistic Director of the UCD Ad Astra Academy, he holds a DMus degree from the Royal Irish Academy of Music with a specialism in perfomance. As founding Artistic Director of the Choral Scholars of University College Dublin, he has established a reputation as one of Ireland's foremost choral composers, choral directors and early-keyboard specialists. His work has a number of focuses. Firstly, he has created and published modern choral arrangements for traditional Irish music, as detailed below. He has also created and published contemporary compositions. Thirdly, he has commissioned and curated new works specifically tailored to the forces and soundscape of Choral Scholars. Dr Earley publishes with Music Sales (UK), Hal Leonard Corporation (USA), Alliance Music (USA) and with Seolta Music (IRL) where he serves as editor of the international College Choral Series. His work 'Body of the Moon' (world premiere 2017) a setting of texts by Galileo Galilei, was commissioned by All Classical Portland Radio (USA) especially for the total solar eclipse across the United States of America. He has created special arrangements for renowned ensembles including the RTÉ Concert Orchestra, the Portland Symphony Orchestra (Maine, USA), Nigel Short's London-based professional choir, Tenebrae (UK), and the Irish Baroque Orchestra. As consort instrumentalist and director, Professor Earley works with many of the world's finest ensembles including the Portland Baroque Orchestra, the Irish Baroque Orchestra, the RTÉ Concert Orchestra, the European Union Chamber Orchestra and the English Chamber Orchestra. He has collaborated with some of the world's great musicians including Konrad Junghaenel, Christopher Hogwood, Roy Goodman, Monica Huggett, Sir James Galway and the late Bernadette Greevy. Dr Earley has performed and conducted in many countries around the world including the Netherlands, Luxembourg, Germany, Austria, Italy, Turkey, the United Kingdom and most recently in the United States of America at Carnegie Hall (NY). Dr Earley has held positions as Visiting Scholar at Lewis & Clark College, Oregon (USA) and Guest Conductor/Scholar at Bowdoin College, Maine (USA). In the latter half of 2018 he was invited guest Chorus Master of the RTÉ Philharmonic Choir for RTÉ Performing Groups.