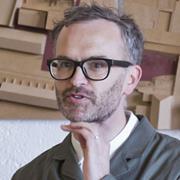 I participate and engage widely in architecture in Ireland and my personal practice includes the design and construction of buildings, academic research, architectural education, the development of national policy in architecture, architectural criticism, public art and the design and curation of exhibitions. I graduated from University College Dublin with a BArch degree in 1997 and with an MArchSc degree in 2000. I have been teaching at U.C.D. Architecture since 1999 and was appointed Lecturer in Architecture in 2006. I was co-founder of the UCD Rising Home research and design studio and in 2016 established the first socially-engaged design studio at UCD called Out.Post.Office. The first three year project concluded in 2017 with work being show from this studio at TATE Liverpool in 2018. I am also a Registered Architect and I am accredited in Architectural Conservation by the R.I.A.I. I joined Grafton Architects in 1998 and was Project Director from 2003-2006. While there, I worked on a variety of projects including the Solstice Meath Arts Centre and Housing and Offices in Oslo, Norway. I was part of the competition winning team for the new faculty building for Universita Luigi Bocconi, Milan. Since 2006, I have been in independent practice and has designed, studied and built a variety of projects including houses, department stores and exhibitions. My has been widely published and reviewed and I have been shortlisted for and received several design awards. I combine this form of spatial practice with teaching, academic research and exhibition curation and design. Fundamentally I am interested in the relationship of people and their built environment. I was research lead on the first survey of public awareness of architecture in Ireland, Your Place and Mine. I have curated exhibitions in London, Kilkenny and Dublin and in 2017-18 was assistant to the Curators of the 16th Architecture Biennale, Venice. I am a registered PhD Student in TU Braunschweig, Germany, where my research focuses on the role of the house in Irish architectural culture and wider society.