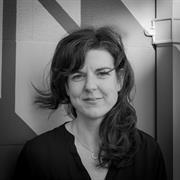 Jorie Lagerwey is an Associate Professor in Television Studies in the School of English, Drama, Film and Creative Writing and the Head of Film Studies. She is the author, with Taylor Nygaard, of Horrible White People: Gender, Genre, and Television's Precarious Whiteness (NYU 2020), which analyzes functions and representations of whiteness in transatlantic TV comedy. The book emphasizes the TV industry, genre, and contemporary racial and gender politics on TV. Her current projects include Single Lives: Modern Women in Literature, Culture and Film, a collection of essays she is co-editing with Katherine Fama. Lagerwey is also author of Postfeminist Celebrity and Motherhood: Brand Mom (Routledge 2016), which analyzes representations of motherhood in celebrity brands and reality television. Her work has appeared in Cinema Journal, Television and New Media, Genders, and elsewhere. Dr. Lagerwey's primary research interests are in the representations of gender and race on television and other digital media; TV genre; discourses of quality on TV and online; and celebrity culture.