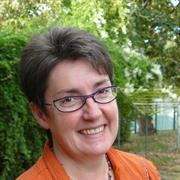 Julie Carson-Berndsen is Full Professor in the UCD School of Computer Science. She received a BA (Mod) in German and Mathematics from Trinity College Dublin in 1986 and was awarded a Council of Europe Higher Education Award to undertake postgraduate studies at the University of Bielefeld, Germany. She received her doctoral degree in 1993 for her research on finite state models in speech recognition supervised by Prof. Dr. Dafydd Gibbon and was awarded the Dissertationspreis der Westfälisch-Lippischen Universitätsgesellschaft for her Dr. Phil. thesis. She worked as a wissenschaftliche Assistentin at the University of Bielefeld until 1998 when she joined University College Dublin. Carson-Berndsen received an SFI Investigator Award in 2002 to undertake research in the area of multilingual ubiquitous speech and language technology and was subsequently awarded an industry supplement to this grant to collaborate with the IBM Dublin Software Lab. Prof. Carson-Berndsen was invited to become a Faculty Fellow at the IBM Centre for Advanced Studies in Dublin in 2003, and in 2005 she won an IBM Innovation Award. Her research group has been developing speech recognition and synthesis systems which use fine-grained linguistic information paving the way for the development of robust multilingual applications which are easily scaleable. Within the SFI-funded Centre for Next Generation Localisation (www.cngl.ie), these technologies were developed further and some of them integrated with machine translation technologies to provide speech-to-speech translation. Prof. Carson-Berndsen was UCD Deputy Registrar for Graduate Studies from 2008 to 2014 and UCD Dean of Graduate Studies from 2010 to 2014. From January to August 2015, she was on sabbatical research leave as Visiting Scholar at Wolfson College, University of Oxford until the end of February 2015, followed by a period as Gastprofessorin at the Exzellenzcluster "Multimodal Computing and Interaction" at the University of the Saarland. She also spent time at the English Department of the University of Münster. Prof. Berndsen is now a Funded Investigator in the SFI-funded ADAPT Centre.