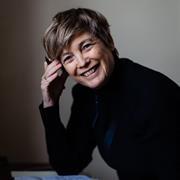 BA (NUI); HDip in Journalism (DCU); MA (Boston College); PhD (NUI) I graduated from University College Cork with a first class honours BA (winning the prize Peel Memorial UCC Student of the Year) and then studied journalism. I joined RTÉ in 1987 but a year later I was awarded a Fulbright Fellowship and I went to study for a Masters at Boston College. I went back to UCC to write a Ph.D. dissertation on the influence of Gaelic culture on the aesthetics and political theory of Edmund Burke (1729-1797). In 1995 I was awarded a scholarship to study at the English Department of the University of California at Berkeley. I spent two academic years there and wrote the bulk of my dissertation while at CAL. In 1997 I joined the Women's Studies Centre (WSC) at University College Dublin and became Director of the WSC for ten years until 2015 when I joined the School of Philosophy where I lecture in the History of Ideas and feminist & gender theory. Even as I have developed other academic fields of interest such as the history of thought and the cultural politics of emotion, I have found it impossible to stop studying and writing on Burke. He is a figure of fascination for those of us who are interested in the intersections between aesthetic production and political engagement. Interpreting his writings and speeches demands an attentiveness to historical context, plural cultural concepts and how audiences are formed as much through emotional interpellation as an appeal to rationality and these interests fuel all my intellectual enquiry. In many ways my academic career is conventional, yet working for so many years in feminist theory I have also found the opportunity to work with people who suffer social disadvantage, specifically cultural stigma. I was a co-founding member of the Irish Lesbian and Gay Archive: the IQA, now safely deposited as a living archive with the National Library of Ireland and I currently work with the group, Justice for Magdalenes Research, we were instrumental in having the State issue apologies to the women of the Magdalene Institutions and in successful lobbying for the Magdalene Redress Scheme. I collect oral histories of witnesses from the Magdalene Laundries. I am a qualified, licensed and insured acupuncturist. I find the study and practice of acupuncture to be a complement, and sometimes antidote, to my academic pursuits.