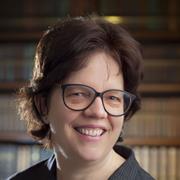 Kathleen James-Chakraborty has been Professor of Art History at UCD since 2007. A graduate of Yale, James-Chakraborty earned her doctorate from the University of Pennsylvania. She has taught at the University of California Berkeley, where she reached the rank of full professor, at the Ruhr University Bochum, where she was a Mercator guest professor, and at the Yale School of Architecture, where she was the Vincent Scully Visiting Professor of Architectural History. In 2019 she received the Gold Medal in the Humanities from the Royal Irish Academy. She currently serves on the boards of the Buildings of Ireland Charitable Trust, the Chester Beatty Library, the National Museum of Ireland and the Society of Architectural Historians. She was from 2012 to 2015 the Chair of the Board of the Irish Architecture Foundation. She organised the fourth international conference of the European Architectural History Network, held in Dublin Castle on 2-4 June 2016. Since 2016 she has delivered plenary or keynote lectures in Athens, Dessau, Frankfurt, Glasgow, Guangzhou, and Paris, lectured at Columbia, Cornell, IIT Kanpur, MIT, the Museum of Modern Art, the School of the Art Institute of Chicago, and the University of Pennsylvania, and delivered conferences papers at Cambridge, Jawaharlal Nehru and Leiden universities. James-Chakraborty is a historian of early modern and modern architecture. James-Chakrabortty's books include Erich Mendelsohn and the Architecture of German Modernism (Cambridge, 1997), German Architecture for a Mass Audience (Routledge, 2000) Architecture since 1400 (Minnesota, 2014; Guangxi, 2017), and Modernism as Memory; Building Identity in the Federal Republic of Germany (Minnesota, 2018), which was shortlisted for the Alice Davis Hitchcock Medallion. She is the editor of India in Art in Ireland (Routledge, 2016) and Bauhaus Culture from Weimar to the Cold War (Minnesota, 2006). Her articles have appeared in German Politics and Society, the Journal of Architectural Education, the Journal of the Society of Architectural Historians, and New German Critique. She has contributed to the catalogues of exhibitions held at the Barbican (London), Folkwang Museum (Essen), the German Architectural Museum (Frankfurt), the Los Angeles County Museum of Art, the Los Angeles Museum of Contemporary Art, the Martin Gropius Bau (Berlin), the Philadelphia Museum of Art, and the Architecture Biennale (Venice), as well as more than a dozen edited books.