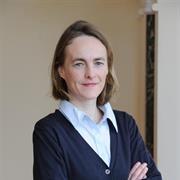 Dr. Marie-Luce Paris is Assistant Professor in Law at UCD Sutherland School of Law. Marie-Luce's primary research interests are in comparative constitutional law, human rights law, European public law, and judicial studies. She has also an interest in legal education. She held research visiting positions at the University of California, Davis School of Law (USA), and at the Australian National University Centre for European Studies (Canberra, Australia). She holds international recognition and was awarded The Ordre des Palmes Académiques (Chevalier rank), the oldest most prestigious non-military decoration awarded to civilians in France, by the French Government for her outstanding work on promoting legal research and education between Ireland and France. Marie-Luce received her legal education at the University of Paris II Panthéon-Assas, France's first law university. She holds two Masters, one practised-oriented (Masters of Laws in Business Law and Tax Law) and one research-oriented (Masters of Laws in European Community Law), both from Paris II University. She received the title of Docteur en droit for her PhD on The Implementation of the European Convention on Human Rights by the United Kingdom. She completed her professional legal training as a Barrister-at-Law at the Ecole D'Avocats Du Barreau De La Cour D'Appel De Paris, and worked as a trainee in law firms and at the Commercial Court in Paris. She is an alumna of the Academy of European Public Law (European Public Law Organisation, Athens). Marie-Luce joined UCD Sutherland School of Law to teach in, and later direct, the BCL Law with French Law and dual degree BCL/Maîtrise Programmes which aim at training UCD law students to the French civil law system. Marie-Luce is currently the Academic Director of the UCD Centre for Human Rights. She previously was the Academic Director of the French Law Programmes and the School Head of International Cooperation. Marie-Luce teaches on a number of undergraduate and graduate courses which include ECHR Law, Comparative Constitutional Law, and French Public Law. She is interested in hearing from prospective PhD students in the broad areas of Comparative Public Law and Politics and European Human Rights Law.