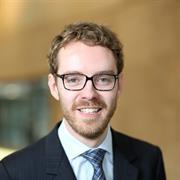 Dr Mark Coen joined the Sutherland School of Law in September 2014. He previously lectured in Dublin Institute of Technology, Trinity College Dublin, Dublin City University and Durham University. Mark graduated from Trinity College Dublin (LL.B.) with first class honours and was a Scholar of the College. He holds the degree of Bachelor of Civil Law from the University of Oxford, where he was a member of Magdalen College and specialised in criminal justice subjects. His doctorate was awarded by Trinity College Dublin in October 2012. Mark's research interests are in public law, especially in contemporary and historical criminal justice and the Law of Evidence. He is also interested in Legal History and Constitutional Law. Mark has a particular interest in trial by jury. His doctoral thesis theorised the approach of the appellate judiciaries in Ireland and England and Wales to allegations of jury irregularities. It passed with no corrections. Mark's research has been published in prestigious international journals including Legal Studies, the Criminal Law Review, the International Journal of Evidence and Proof, the the Human Rights Law Review and the American Journal of Legal History. With Dr Niamh Howlin of the Sutherland School of Law, Dr Colette Barry of Sheffield Hallam University and Mr John Lynch, Mark is currently working on a project entitled 'Judge-Jury Interactions in Ireland', funded by the Fitzpatrick Family Foundation. This empirical study is the first to examine the relationship between judges and juries in Irish criminal trials, investigating issues such as how judges approach and prepare for the summing up and the extent to which they deliver internet warnings and provide written materials to jurors. Mark has a Professional Certificate in University Teaching and Learning. He delivers a research-led, seminar module on the jury system (imaginatively called Jury Trials) with Dr Niamh Howlin. He welcomes proposals from potential PhD students interested in researching topics pertaining to trial by jury, the Law of Evidence, Criminal Law and criminal justice history. In March and April 2018 Mark visited Victoria University of Wellington as a Charlemont Scholar of the Royal Irish Academy. He also gave the inaugural seminar at the Centre for Crime, Law and Justice at the University of New South Wales. Mark was President of the Irish Association of Law Teachers from November 2017 to November 2018. In 2019 he will co-host the Society of Legal Scholars Annual Seminar at UCD with Dr Fergal Davis of King's College London, on the theme of the 80th anniversary of the passage of the Offences Against the State Act 1939.