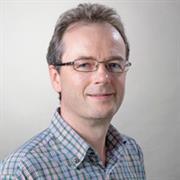 Neal Murphy joined the staff of UCD in 1989 having completed an MEngSc in Robotics a couple of years earlier. Since then, his main area of interest has been Mechanics of Materials, to which he has subjected hoards of undergraduate engineering students over the past two decades. Following a chance encounter in the early 1990s with the eminent Prof. Bertram Broberg, late of Lund University and UCD, he developed a keen interest in Fracture Mechanics which has dominated his research activities to date. In 2007 he was awarded a PhD from UCD. The title of his thesis was "Dynamic Fracture of PMMA: A Combined Experimental and Numerical Investigation", which was supervised by Prof. Alojz Ivankovic, formally of Imperial College London and now at UCD. His current research activities include the fracture behaviour of structural adhesives and composite materials (both experimental and computational analysis), and the brittle fracture of PCBN and PCD cutting tools at a wide range of loading rates and temperatures. External interests include tennis, gardening, and sampling as wide a variety of wines as possible. He is married with two children.