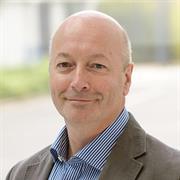 Steve graduated from Imperial College of Science and Technology (University of London) with a joint honours degree in Chemistry and Biochemistry before completing a PhD in Biochemistry at the University of Cambridge. During his PhD he was awarded an Elmore Medical Research Fellowship. It was during this fellowship that his interests in the regulation of the mammalian cell cycle began, the subject of his research that was continued when he moved the Department of Human Anatomy & Cell Biology at the University of Liverpool to take up a post as a Wellcome Trust funded lecturer. Subsequently he was a University Lecturer and then Senior Lecturer. During this period his research included the use of two-dimensional gel electrophoresis, which was later combined with mass spectrometry for protein characterisation. Steve has been active in the practical implementation of collaborative proteomics projects and set up a multi-user proteomics facility at the University of Liverpool that served as a 'prototype' for the facility he established when he moved to the Conway Institute in 2003. Stephen's vision for the development of proteomics in UCD has been to use his expertise and experience to apply proteomics (in its broadest definition) to a diverse range of research programmes. Of particular interest to Steve is the development of translational projects that align research results to the clinical setting and the development of methods for discovery and subsequent quantitative measurement of proteomic biomarkers.Steve has received a Sir Henry Wellcome Commemorative Award for Innovative Research, has been Director of Research and member of the Board of a Cambridge-based seed-corn funded fledgling biotech company and has served in small scale consultancy capacities for a number of commercial organizations. Steve has given over 150 invited presentations at international events, published over 75 scientific papers as well as editing and contributing to several books including editing one of the first books on Proteomics that was translated into Chinese and Japanese. He is on the editorial board of several journals including in a more senior capacity for 'Proteomics' and the 'Journal of Proteomics' and regularly reviews manuscripts and grants for a number of international organisations. Steve is a committee member of European Proteomics Association and British Society for Proteome Research for which he is currently vice-President as well. He is currently the lead organiser of 16th Human Proteome Organisation World Congress which will be held in the Convention Centre in Dublin (September 2017).