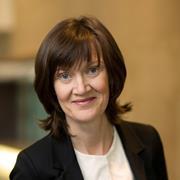 Dr. Suzanne Egan is Associate Professor in the Sutherland School of Law at University College Dublin where she has just completed a four-year term as the first Director of the UCD Centre for Human Rights (2015 - 2019). Suzanne has published widely in the field of international human rights law, policy and education and was awarded a Higher Doctorate of Laws (LLD) by the National University of Ireland in 2017 for her published work in the field. Significant works include her book on The UN Human Rights Treaty System: Law and Procedure (Bloomsbury, 2012) which was shortlisted for the Irish Association of Law Teachers, Kevin Boyle prize for outstanding legal scholarship; her edited collection, International Human Rights Law: Perspectives from Ireland (Bloomsbury, 2015); and most recently Extraordinary Rendition and Human Rights: Examining State Accountability and Complicity (Palgrave, 2019). Suzanne teaches courses on International and European Human Rights Law and Human Rights Education at the Law School and was awarded a Teaching Excellence Award by UCD in 2017 for her sustained commitment to teaching excellence and student learning. Suzanne is a graduate of U.C.D. and Osgoode Hall Law School, Toronto and a qualified barrister. Prior to lecturing at UCD, she was the Legal Supervisor of an independent research centre on refugee law and policy in Canada and a Research Assistant at the Law Reform Commission in Ireland. She has engaged in human rights training for various non-governmental organisations, the Council of Europe as well as members of the legal profession. In 2000, she was appointed by the government to serve as a Member of the Irish Human Rights Commission and was subsequently re-appointed for a second term in 2006. She was also a member of the Joint Committee of the Irish Human Rights Commission and the Northern Ireland Human Rights Commission (2001-2012). Suzanne has been invited on several occasions to brief members of the Irish Parliament on key issues of international human rights law and has provided advice to the Irish Constitutional Convention on the concept of an all-Ireland Charter of Human Rights suggested in the Belfast Agreement 1998. Suzanne has been a Visiting Professor at De Paul Law School, Chicago, the University of Connecticut and a Visiting Fellow at Harvard Law School's Human Rights Program (2011-2012). She is currently an honorary Visiting Research Fellow at the University of Bristol's, Human Rights Implementation Centre.