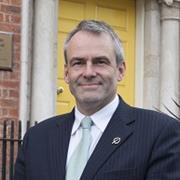 Professor Tim Lynch is the Vice Principal for Health Affairs at UCD and Chief Academic Officer at the Ireland East Hospital Group while also a Consultant Neurologist at the Mater Misericordiae University Hospital (MMUH) and Beaumont Hospital. He is the Director of the Dublin Neurological Institute at the MMUH and Professor of Neurology at University College Dublin (UCD) and Clinical Investigator at the Conway Institute, UCD. Prof Lynch is a Royal College of Surgeons medical graduate from 1984 and a UCD BSc Pharmacology graduate from 1986. He trained in clinical medicine initially in the Richmond Hospital and subsequently Beaumont Hospital, the Mater Misericordiae University Hospital before doing one year of paediatric neurology in Our Lady's Hospital for Sick Children, Crumlin. In 1990 Prof Lynch moved to New York and spent eight years at Columbia Presbyterian Medical Centre/Columbia University initially doing a residency in neurology under the supervision of Prof Lewis P Rowland before spending a two-year Fellowship in Movement Disorders & Genetics of Neurodegeneration under the supervision of Prof Stanley Fahn. During his Fellowship Prof Lynch developed an interest in Genetics of Movement Disorders and Neurodegeneration doing early linkage analysis and gene cloning. Prof Lynch returned to take up the post as Consultant Neurologist at the MMUH in 1998. He studied an Irish-American family with frontotemporal dementia, Parkinsonism and Amyotrophy. Prof Lynch and Wilhelmsen published seminal papers on Frontotemporal Dementia Syndrome linked to chromosome 17. Prof Lynch then helped to form collaboration with the Mayo Clinic, Washington University, St Louis and Maastricht University resulting in cloning the tau gene for Frontotemporal Dementia linked to chromosome 17 in a number of pedigrees. This paper was published in Nature in 1998. He has developed the Department of Neurology at the MMUH setting up a Movement Disorder Clinic, a Multiple Sclerosis Clinic, a Migraine and Headache Clinic, a Deep Brain Stimulation Clinic, a Stroke Unit culminating in the opening of the Dublin Neurological Institute at the MMUH in September 2008. He was appointed Professor of Neurology, University College Dublin in 2007 and Director of the Dublin Neurological Institute in 2008. Prof Lynch has published over eighty articles in peer-reviewed journals on the genetics of Parkinson's disease, neurodegeneration and other movement disorders. He collaborates with research groups at the Mayo Clinic, US, University College London, National Institute of Health, US and Conway Institute, University College Dublin. His main research interest includes Parkinson's disease, movement disorders, genetics of Parkinson's disease and Parkinsonism, genetics of atypical dementia and the genetics of multiple sclerosis.